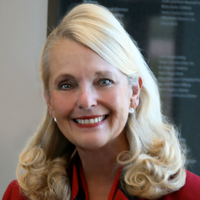 “There is no one more deserving of this great recognition for her more than 30 years of leadership at College of the Canyons,” said Nancy Starczyk, chair of the SCV Chamber Board of Directors,  “Dr. Van Hook has spent her entire career educating our workforce and has implemented numerous business support service offerings at the College to support economic development.”

Dr. Van Hook currently serves as a member of the SCV Chamber’s Board of Directors and the Chair of The Chamber Institute.

The SCV Chamber’s Lifetime Achievement Award is one of the top honors a business leader can receive in the Santa Clarita Valley.  The Award is bestowed on leaders that have demonstrated a significant, long-term, positive impact on the business community and the greater Santa Clarita Valley. Some past recipients include Rosalind Wayman, Connie Worden-Roberts and Caroline Lodes.

Passionately committed to higher education and its integral role in economic development, Dr. Van Hook has inspired the forging of educational and training partnerships with community organizations, government agencies, and private industry to ensure that citizens possess the high-technology skills that will sustain California’s economic growth.

“Dr. Van Hook is an inspiration to all of us at the SCV Chamber and across the entire business community,” said Ivan Volschenk, managing partner with Evolve Business Strategies which manages the SCV Chamber.  “Her leadership and focus in providing business education and training over the last three decades has had a strong, positive impact on the success of local businesses in ways that will last for years to come.”

First launched in 1994 through Dr. Van Hook’s leadership, the college’s Economic Development Division has grown to include the Employee Training Institute, Center for Applied Competitive Technologies, Small Business Development Center, plus other regional and statewide initiatives aimed at helping local companies remain competitive in their industries.  Over the past 25 years, the division has generated $43.6 million in capital for local businesses, served 12,038 companies, and trained 61,626 employees.

As California’s current longest serving community college chief executive officer, Dr. Van Hook has built a reputation for innovation and collaboration during her four and a half-decade career as a higher education leader in California.  She presides over a district that covers 365 square miles and serves an ever-increasing and diverse population numbering more than 270,000 people.  Located in the third largest city in Los Angeles County, College of the Canyons is the fourth largest employer in the Santa Clarita Valley and community leaders describe it as an “innovative, cutting-edge, responsive, flexible, resourceful, high-quality institution of higher learning.”

Her commitment to Santa Clarita also includes past service as a board member of the Red Cross, SCV Education Foundation, the SCV Fine Arts Council, the Henry Mayo Newhall Memorial Hospital Governance Committee, the Michael Hoefflin Foundation for Children’s Cancer, and chairing the United Way Executive Cabinet. These connections enable the college to not only fulfill its traditional mission of providing outstanding higher education, but also enhance its ability to serve the broader community, including K-12 students, veterans, older adults, and local business and industry.

In Santa Clarita, Dr. Van Hook was named as the SCV Newsmaker of the Year, a Leader of Character by the Boy Scouts of America, and the No. 1 most influential person in the Santa Clarita Valley’s Top 51 by The Signal.  She was honored at Zonta’s 2016 Tribute to Women for service to women in the community, and chosen as the 2017 Inductee into the Court of Lord Chamberlain at the Shakespeare Lord Chamberlain Gala in recognition of her significant contributions in support of the arts in the community.  Most recently, Dr. Van Hook was honored to receive the SCV Business Journal’s Women in Business Lifetime Achievement Award, as well as the SCVi Vision in Education Award.

Dr. Van Hook will be honored with the SCV Chamber’s Lifetime Achievement Award at the 97th Annual Awards and Installation Gala on Friday, January 24, 2020.  Other award recipients include:

For information on tickets and sponsorships, please visit www.scvchamber.com.

ABOUT THE SANTA CLARITA VALLEY CHAMBER OF COMMERCE

The Santa Clarita Valley Chamber of Commerce is the largest business membership organization in the Santa Clarita Valley representing more than 65,000 member employees.  The Chamber serves as “The Voice of Business” working as the SCV’s leading business advocacy organization in the third largest city in the County of Los Angeles.  Founded in 1923, the Chamber works to advocate for, educate and connect the business community.